Taylor Swift is now singing the praises of Joe Biden and Kamala Harris. The famous pop star announced that she had talked to V Magazine about why she was supporting Biden’s presidential candidacy in a tweet on October 7, according to an article on hollywoodreporter.com. 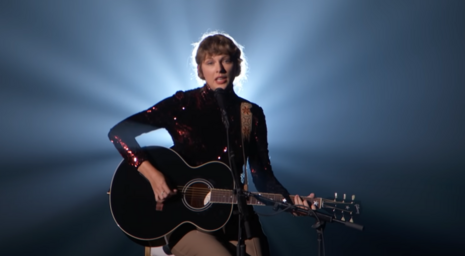 “I spoke to @vmagazine about why I’ll be voting for Joe Biden for president. So apt that it’s come out on the night of the VP debate. Gonna be watching and supporting @KamalaHarris by yelling at the tv a lot. And I also have custom cookies”

Apt? It was probably planned.

Swift told V that, “The change we need most is to elect a president who recognizes that people of color deserve to feel safe and represented, that women deserve the right to choose what happens to their bodies, and that the LGBTQIA+ community deserves to be acknowledged and included. Everyone deserves a government that takes global health risks seriously and puts the lives of its people first. The only way we can begin to make things better is to choose leaders who are willing to face these issues and find ways to work through them.”

The LGBTQIA+ community is already acknowledged and included. Just watch primetime TV. They’re even allowed to get married. What else do they want?

In addition, people of color are already represented, even if their representatives come up with foolish ideas like defunding the police. People of color also have news outlets on their side. How much more protection do they need to feel safe?

Swift further declared on V Magazine that “I will proudly vote for Joe Biden and Kamala Harris in this year’s presidential election. Under their leadership, I believe America has a chance to start the healing process it so desperately needs.”

Maybe, but a large faction of Biden’s supporters seem too angry to go through any kind of healing process that could potentially serve to unite the country. Instead, they appear to be intent on dividing the country.

Billboard.com reported that Biden appreciated Swift’s vote, tweeting “Taylor — Thanks for your support and for speaking out at this crucial moment in our nation’s history. Election Day is right around the corner — are you ready for it?”

Swift certainly is, so she probably won’t reply, “I knew you were trouble.”

Cowboys already turning on Mike McCarthy and his staff

Cowboys already turning on Mike McCarthy and his staff

Traditional America Values CAN be Reinstated and Preserved – But Only...