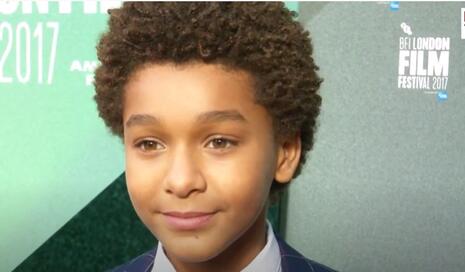 Ever since Colin Kaepernick began his shameful national anthem protests in 2016, the fawning left-stream media have portrayed him as a towering icon of the social justice movement. Yet Netflix just cast a 5-foot-3-inch twerp to portray Kaepernick in an upcoming six-part series.

Actor Jaden Michael (seen in photo), 17, will portray Kaepernick in Colin in Black & White.  Michael is best known for appearances in “The Get Down,” “Wonderstruck,” “Custody” and “Vampires vs. The Bronx.”

Kaepernick is thrilled with the selection of the boy who will play him, tweeting:

Dominic Patten, the senior editor, legal and TV critic for Deadline, explains that the series will focus on Kaepernick’s adolescence and early football, basketball and baseball successes in Turlock, Calif.

“Colin in Black & White will put specific emphasis on the influences and circumstances that developed the social and cultural conscience of the young man adopted by a white family,” Patten says. “Leaning into the culture warrior that Kaepernick has become, the series will spotlight the seeds laid in the early 2000s that flourished in the off-the-field battle of today.”

Kaepernick began disrespectfully sitting, then kneeling, during the Star Spangled Banner at NFL preseason games in 2016. He has been social media sniping at America as a land of oppression and police brutality ever since. No NFL team has touched him, he (along with former teammate Eric Reid) sued the league for allegedly blacklisting them and they eventually reached a settlement.

Last year, the NFL privileged the notorious Kaepernick with a special tryout opportunity, but he blew it off, showed up at a different location and badmouthed the league.

This summer, NFL Commissioner Roger Goodell bowed at the altar of Black Lives Matter and said he should have listened to Kaepernick four years ago.

Patten is just one of the latest in the media to carry the ball for the America-hating malcontent and hero to the radical Left.:

“Speaking of blood-sucking, the NFL has recently copped to treating Kaepernick badly over his political POV. The league axed the Super Bowl XLVII vet in 2016 for taking a knee that season during the national anthem in protest over police violence and systemic racism. However, for all the current mea culpa on the part of the Roger Goodell-led league and Kaepernick being featured in an NFL Black Lives Matter video this season, no team has offered the now 32-year-old a real tryout or contract.”

Patten contends that Kaepernick is now celebrated in NFL front offices and VIP skyboxes for his controversial political stance.

Variety’s Will Thorne writes that the series will cover Kaepernick’s early life as a Black child growing up with a white adopted family and “his journey to become a great quarterback while defining his identity. It will also explore what led him to become a civil rights advocate.”

Great quarterbacks don’t compile losing records, and Kaepernick was 28-30 during his career as a starting quarterback in the NFL. Nevertheless, by leading a radical anti-American movement he’s got the right stuff to merit a series on Netflix — now the go-to forum for sexualizing young girls (in “Cuties”) and for glorifying rejected athletes-turned-radical-activists.

It hasn’t been announced when the Kaepernick sham will air on Netflix.

Not Just Talk: How Congress Can Reduce Health Care Premiums and...